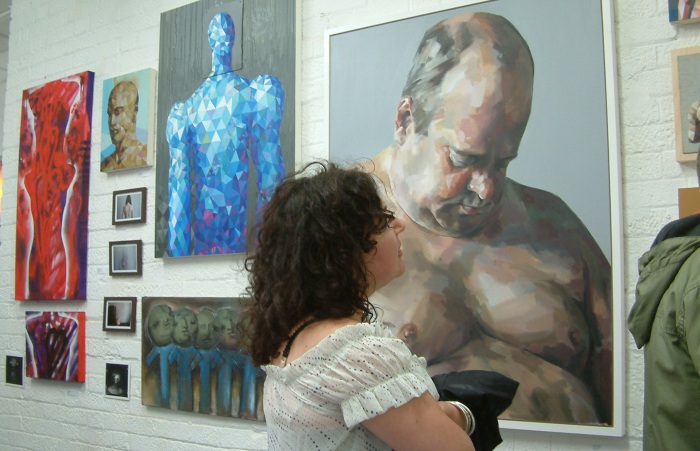 From October 1st 2011 until late 2014, the space known as Cultivate Vyner Street was operated as a rather full-on artist-run challenge of a gallery. The sometimes rewarding, sometimes infuriating space was run, on a daily basis, mostly by two artists, Sean Worrall and Emma Harvey. A constant never-closed run of some 112 group shows, solo shows and events over a non-stop period of just over three always open-door years, we think we can feel rather pleased with what we achieved during our time down there right in the middle of Vyner Street. 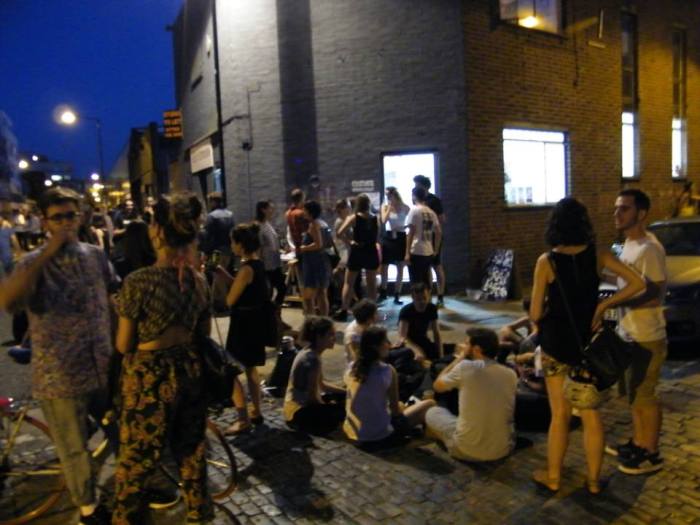 We finally vacated the building in Vyner Street at the end of 2014, the doors were finally closed on us (with very little warning) for good on December 31st, the developers moved in, the landlord had sold out to them, we had little warning and no real say in the matter   The door was locked, shows cancelled, the walls were pulled down and up went another block of overpriced flats.  Cultivate as far as Vyner Street was concerned was history. . Sad to see what has become of the street now, when we moved in there was something like sixteen galleries and art spaces, there just a couple of the bigger corporate type galleries left now, all the original creativity and unique artist-led DIY spirit drained, the street now, in early 2017 is just another East London street where once it was unique and really rather special

But there was a reason why we called the space Cultivate Vyner Street. We knew it would always be evolving and at other times it would be Cultivate Somewhere Else, and so we are evolving once again… 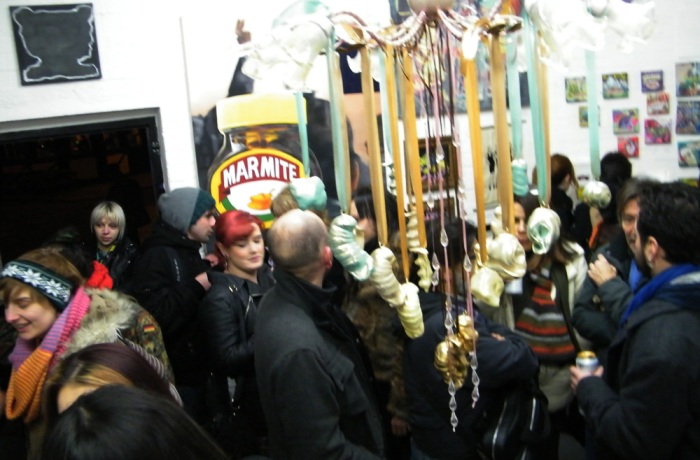 Spring 2015, and like we said, we’ll be back in five minutes. Right now we are working on a number of events in different places and spaces (as well as a book that documents the Vyner Street period) Watch this space, it may look quiet, but like the most serene of gliding swans, our feet are working away like crazy out of sight under the water…. We’ll be back in Five minutes with more artist-run events and more doing it ourselves with our loose collective of artists, more getting on with it rather than waiting for it to happen. 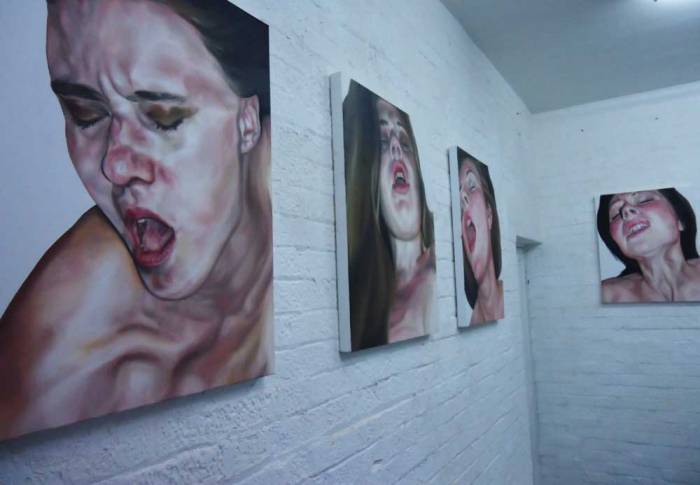 Since leaving our once permanent East London home in Vyner Street, we’ve been doing different things in different places. We’ve been leading a nomadic lifestyle and putting on shows in all kinds of places and spaces, we expect this will go on for the foreseeable future. 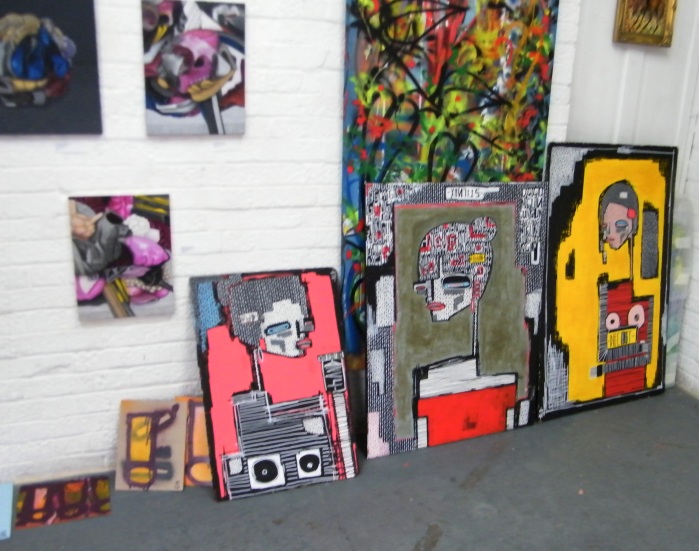 Three ALO pieces arriving for the Can show….

In recent (post Vyner Street) times there have been shows in big East London warehouses, under railway bridges in Hackney, in basement galleries in Dalston (over on the Hackney borders of London N16), there’s been things at the seaside, a show in a treasure trove of a draper’s shop, an exhibition or two (or three) in a more formal white-walled gallery under a London Fields Railway arch in E8.  We’ve been to car parks in Liverpool, in Folkstone, in Hastings and Margate, there’s been street stalls in Shoreditch, art on the walls of metal workshops in Bethnal Green, we’ve taken part in dog shows, Art Car Boot Fair events, we’ve Cultivated on the streets, in formal Gallery spaces all over town, we’re doing things on-line. 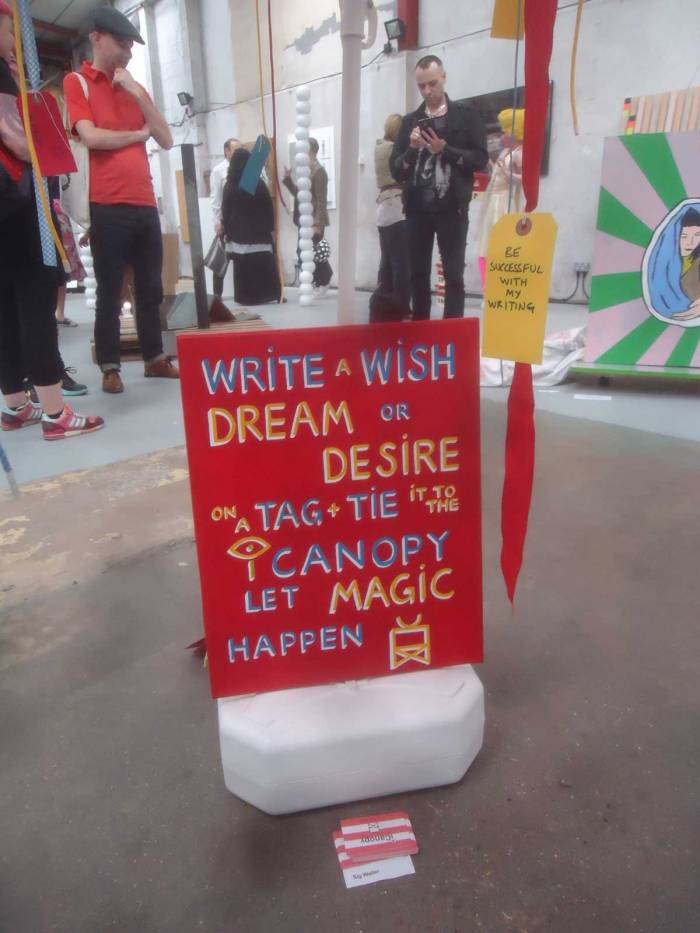 I expect we’ll throw out an anchor and settle in another permanent space one day soon but for now we’re rather enjoying the freedom to do our Cultivate thing in all kinds of places and spaces..

There was history before we started Cultivating in Vyner Street of course.  There was the big Stinging Netil Art Fair alive with artists and bands, a take over of a whole East London market for one day in the summer of 2011 – over a hundred artists on 40 stalls, band sgages and more. Before that there were other shows in other places, group shows organised and such by the team that eventually became Cultivate, how far d oyou want to go back?.

We celebrated five years of Cultivate with a very busy group show over at BSMT Space gallery, and as we head towards February 2017 we think there’s been around 150 shows, events and such under the Cultivate banner. We have no idea how many artists have been involved, well over a thousand have made use of out time, our walls, our plinths and well, enough of the history, Cultivate has always been about what we’re doing next, about the next exciting show or artist we want to introduce, on with the next thing, we’ll have the book and the history for later… 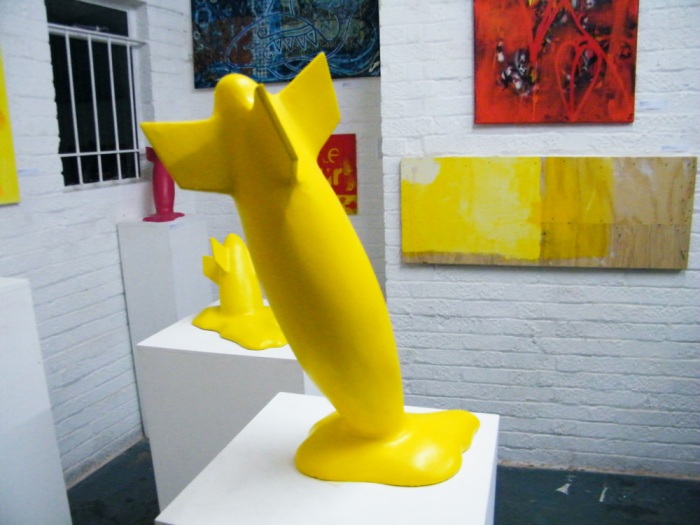 PRIMARIES with the bombs of MARCOS JUNCAL 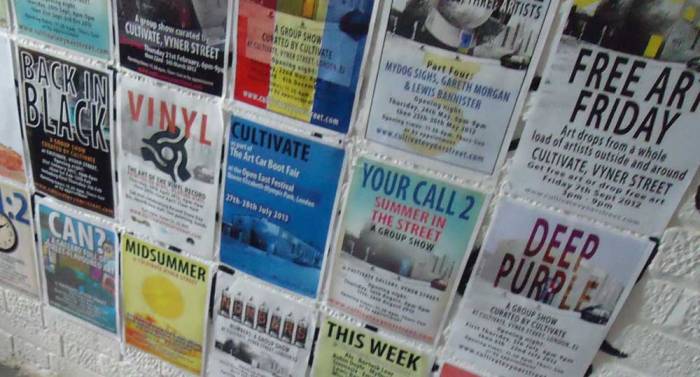 Some of the many open calls at Cultivate