Threats of zombie infection down the Cambridge Heath Road, rumours of outbreaks in East London, 2.8 days of chaos, Primary confusion, tales of quarantine stations being set up around the East End, denials, counter rumours, and us being sworn to secrecy while we were asked to free up Cultivate for use as a possible emergency processing station. Well not so much asked as told, and so the Primaries group show with all the reds, yellows and blues, got reluctantly moved and the space freed up for use as a check point, and then a message to say the threat had demised, things got changed again (or maybe covered up? There does seem to be a Zombie problem every time the big gallery at the bottom of the road has an opening or when the man over there in the corner want to make some quick money out of an artist or two).  Seems the East London outbreak is now more over towards the Isle Of Dogs area now?  So all change again, Primaries, rather annoyingly, by the time the threat has shifted, had already been moved once, putting it back to the original date would have cause even more confusion, so the Primaries show got moved to later in November and with the zombies gone everything was freed up at  Cultivate for Dia la De Los Muertos…”and you can never go wrong when you evoke the Mexican spirits of day of the dead” said Carrie….

DIA DE LOS MUERTOS will open on Thursday evening November 1st, the traditional date of the first day of the Mexican Day Of The Dead festival, our celebration of the celebration will run from (first) Thursday evening through the weekend until end of the day, 6pm on Sunday 4th November.  There will be a shrine in place and people are invited to add to the shrine during the event.  The will show will be curated by Julieta Hernández Adame and Sean Worrall, we expect it to be alive with colour, flowers. Art, we expect lots of art from Carrie Reichardt, other artists are being invited now… this will be partly exhibition, partly installation, partly whatever you make it, come join in…

Meanwhile, today and for this coming weekend we go on with the second week of the six artist CULTIVATION show.  For this one I just simply invited five artists who’s work I particularly like and who I’d like to share the space with for two weeks, seemed like a fitting contrast to MyDog Sighs, Los Dave, M-One and the In Rust We Trust show and we are after all forever fiendishly revising what this is a all about… 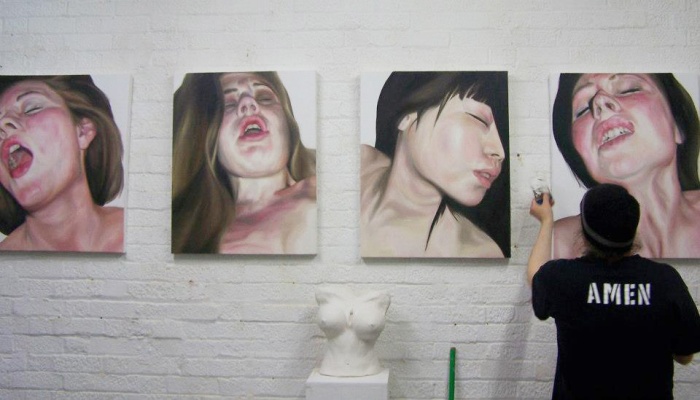 Fiendishly revising the ever evolving idea of running an art gallery, the interaction, the annoyance, and how conservative are the current crop of recently escaped art students? Isn’t it suppose, a little more than an endless tug on the neck of a free bottle and a meet up with your ex student mates and what ever’s opening tonight?  Let’s not go there again, the people who came to see MyDog Sighs and his friends were such an uncluttered pleasure contrast, honest people enjoying themselves, van drivers, couriers, people out enjoying their art for no other reason than because, people coming in and talking excitedly of the Pablo Delgardo show up the road, of Sheppard Fairey being in town and taking him to him as he paints, of David Walker up his ladder on the street around the corner, Sweet Toof’s latest. and they came back to collect their cans and such, and continued enjoying the next show in the same uncluttered way, enjoying Emma Harvey’s paintings, Emma Buggy’s challenging sculpture, Madeliene’s rabbits, those black leafhearts on the red canvas, David Agenjo’s colours, his forms, textures, his hands, his paws, his painterly delight. .. 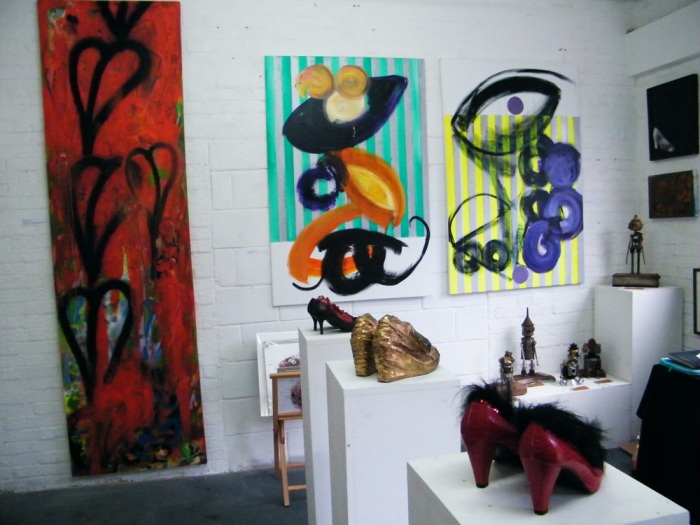 This week the view of the street needed to be taken in some kind of semi severed state, the floods of people clutching their free beer at the Wilkinson open designed to coincide with Frieze week, the cynical money making of the man in the corner and his space full of nothing but the friends and family of those he’s made this month’s not-for-profit money out of,  anger and beguilement and at the same time excitement and art enthusiasm saved by the taxi driver who came in to tell me about how he’d being regularly driving an old and ailing artist who was quite a name in the Sixties and Seventies (and who probably doesn’t want to be named here) around and how the artist had given the taxi driver a painting because he, the artist, not the taxi driver, wouldn’t live much longer and he wanted to share his art and the taxi driver could probably make a bit out of it in a year when he was dead if he didn’t really want it, be worth it when they write the obits and hold the retrospectives.  Saved by the former model from the 1960’s who regularly comes in and tell us tales of the street back in the day, I won’t claim to have known the Krays but this was a rough area and you never went in that pub over there if you knew what was good for you  – she’s a delight when she comes in with her dog, sings in the St Joseph Hospice choir and sometimes likes to buy small pieces of art as a treat to herself as she tell tales of her East End life. Saved by the big Rasta who passed most days with a clenched fist and a slight smile as he booms out “Cultivate”, we like our open door and the friends we’ve made.   Went down to the Wilkinson opening, all I saw was people clutching bottles, taking with their backs to the art, obscuring it for everyone, refusing to move a little, scanned the room to see if anyone was there for the art, they didn’t appear to be, still, nice social event and some free beer for the recently ex art students who don’t know what to do with themselves now… left the space, I’ll go back later when I can next escape our corner and explore it without the opening night crowds. Sent a rather interesting woman from new York down there earlier today, she came back and said thank you, said it was profoundly moving and rather emotional, that was good to hear, not all zombies then…. We’re still enjoying the street and all the different shapes and sizes….