Someone just objected to us posting this photograph on the Cultivate Facebook page this morning, seems he thinks it is “meaningless”, so just for him we’ll post it here as well. That damn statue in Bristol should have been pulled down years ago, that photo is the most beautiful thing I’ve seen in ages, here’s what we said on Facebook

“Today, we’ll just leave this image here, a positve powerful image from Bristol and the weekend. An image that matters, frankly I was shocked to see that statue was still there, haven’t people been protesting about it for years (not my photo, not sure who did take it, I “borrowed” it, I’ve seen it several times this morning, if someone wants credit we’de be delighted to add a credit)”

“This photo is completely meaningless! To elevate violence and looting and disrespect in this day and age … shocking to say the least” so said the white bible-quoating (frankly not very good) artist from South Africa as he objected to our posting on Facebool of that most meaninful of beautiful photos taken in Bristol this weekend. Aphoto taken after that aborant statue of than damn slave trader who sent thousands to their deaths and many many thousand more on a path of very little other than a life of missery. If you object to us sharing that that photo today then we’re not the gallery for you. More power to the people of Bristol for making new history, and whatever your name is up there giving the salute like that, brilliant, more power to you, that is a beautiful image, that is the most meaningful thing I’ve seen in ages. 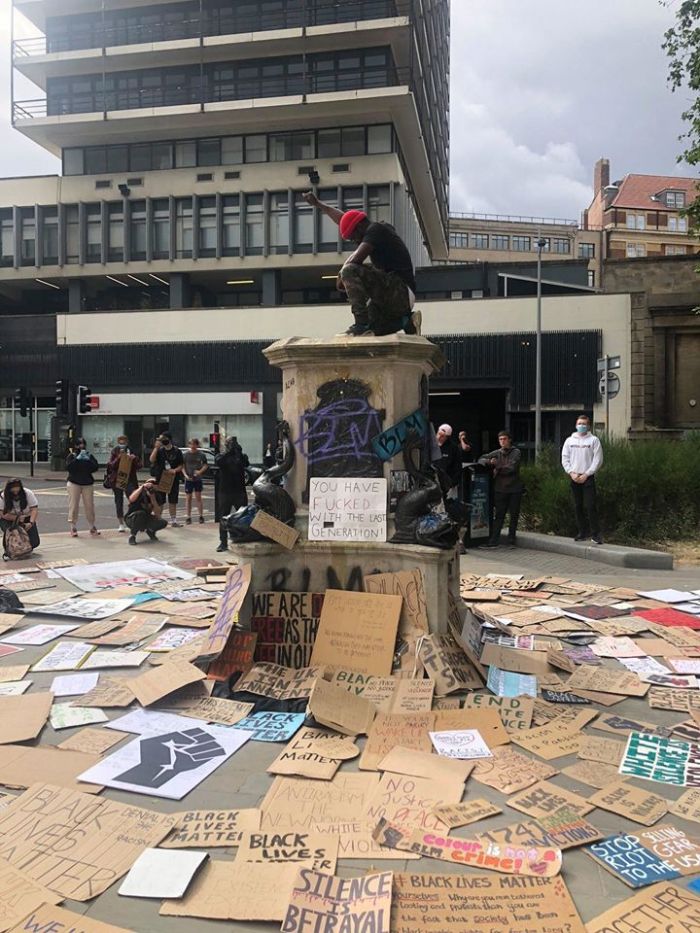 And just for clarification, I’ll leave this painting down here at the foot of the page as well. I painted it one day last week, I wrote it on my own website a couple of days back

“Art can be a conflicted set of emotions at times, these last few weeks have made me think rather a lot about what we do with Cultivate, what I do with Organ and especailly what I do as an artist.  I mean the idea of actually painting a portrait of George Floyd is rediculously pointless, I mostly did it for me, to say his name as it were, and yes I know rediculously self-indugent thing to say and it doesn’t help anything much in any kind of way, I did try to address some of my thoughts in terms of art and curating and such via the Cultivate web pages – Inclusion, engagement, open calls, open doors, what is the policy? Can we do more? Let’s Create? Blackout Tuesday?  – I did follow those recent nurse portraits with a painting of George Floyd, portraits aren’t my comfort zone, in all honesty I don’t really want to paint portraits but surerly during times like these art has to say something?  And anyway, who the hell needs another painting of an apple or an orange during times like these? The Other Sean says something with some of his paintings, he says far more than I do  –  ORGAN THING: Sean Scully, Blackout Wednesday, art as a force for good… . I do draw people all the time, I have mountains of sketchbooks full of drawings of people, observations rather than portraits but….