So, one month on from the opening of the YEASTIE GIRLS show and time to reflect on my first curated exhibition at CULTIVATE Vyner Street.  The aim of the show was to re-visit the ethos of Riot Grrrl; questioning whether the underground feminist punk rock movement still had relevance 20 years on after it all began, and, if so, what form would such Riot Grrrl inspired creativity take in 2013?

Selecting the art and artists was very hard but so rewarding. With the ethos of Riot Grrrl in my mind, the significance of just ‘doing’ and being creative was almost as important as the actual artwork displayed. There was an overwhelming positive and enthusiastic response from all the artists who took part (and those that didn’t), which made the exhibition feel alive and exciting. It felt important to be able to share our individual creativity within this group show.  And it was through our collective response that a connection was felt; artists with fellow artists; viewers with the artwork; a celebration of creativity and enjoyment of the vibrant energy from everyone involved.

The opening night was extremely busy, the gallery was packed full and it also featured the ‘Don’t Stop Me Until…’ performance from Agata Cardoso. Agata’s performance lasted for around 30 minutes and featured the repetitive behaviour of the artist eating a ribbon whilst naked, with a metronome ticking away, aiming “to slow everything down, mind, body and raise personal conscience and awareness to bring out emotions in people that they would not usually experience or feelings and emotions they do not usually like to confront”. Agata succeeded in stopping people in their tracks, mesmerized by, and questioning, what they were watching in this corner of the gallery.  I really loved her performance and the direct dialogue she created between performer and audience was intense, captivating and important.

The show attracted a lot of visitors throughout the two weeks, people came especially to see the exhibition and really spent a long time really looking at the work. There were also quite a few chuckles to be heard and comments about how humorous it was. This rather took me by surprise however the more I looked the more I began to understand their response; the anonymous covert photographs in shopping changing rooms (‘It’s Not You It’s The Lighting!”); Emma Buggy’s sculptural collection of Orifice Crustaceans; The Cuntess’s banners; and the ‘Red’ painting hung up high that demanded a second look.  But perhaps this was also a reaction to feeling uncomfortable or awkward and perhaps this was a good thing. A reaction was provoked. Perhaps humour is a better way to communicate important issues in 2013; does anger and shouting actually have an affect anymore? Perhaps it is a more subtle, infecting and affecting way of communication.

However, there were also comments that the more people looked at the work the more they saw the real, important and serious issues being communicated in the show; the ‘cut fruit’ series of paintings from Fiona Dent highlighting female genital mutilation; the photographic work of Agata Cardoso; Tracey Moberly’s photographs ‘Tits on Tap’; the subtle prints from Julia Maddison; Emma Buggy’s Genitalia Chandelier; the video piece about masculinity and power by Blanca Haddad which was performed at the Habana biennale; in fact every piece in this show addressed an important issue and it was very rewarding to see people being stopped in their tracks and spending a long time just standing and contemplating each piece.

Saturday 23rd February was our zine and book day and along came the Feminist Library (who have been going for over 30 years with a huge archive of material over in Waterloo) with spare copies of vintage ‘Spare Rib’ magazine and ‘Feminist Review’ as well as all sorts of newsletters, badges and more (their ‘Riots not Diets’ magnet now permanently on my fridge door!)  We had copies of the Organ zine and Albaze! fanzines from the Riot Grrrl era, and new Albaze! Book, as well as current 2013 zines from Girls Get Busy Zine and hand made one off zines that people brought in to display. The gallery was alive with art and words and I loved it!

I also loved the little corner of the gallery where we had a Riot Grrrl notice board which featured the vibrant Polaroid artwork of Consuelo Giorgi as well as loads of flyers, gig info, an interview with Bikini Kill courtesy of Val Pheonix, a printed online diary from Linus (“Linus were one of the bands who really did lots, organised lots, they’re all but forgotten now…I think his diary tells the story of those times in London rather well” -Organ)) as well as zine info, lots of free badges, bags and so much more, there was always something new to look at and find out about. It was vibrant, full of colour and information and the real ethos of Riot Grrrl was alive; the doing, the sharing, the creating.

And then it was over… but however sad I felt at the show being brought down it really was brilliant to be around all the artwork whilst looking after the show, I never got bored and found it constantly inspiring, seeing new things each day.  I was particularly pleased that the show featured a range of different art disciplines as well; performance, painting, video, prints, sculpture, written word, textiles… seems our creative outputs and expressions are taking every form possible.

The overwhelming response to this exhibition from the artists involved to visitors to the show, is that there are still very real, very serious, issues that people want to engage with.  The question now is how do we continue and would artists like to be involved? I would love to find a way of continuing the positive vibe and energy of this show into more, more sharing, more creativity, more collaborations…. How do we continue to be heard? A YEASTIE GIRLS group show each year? A YEASTIE GIRLS online presence? A space to perform, to show our art, ideas to share? Answers on a postcard please info@cultivatevynerstreet.com (watch this space…)

“I really really like the subtle humour and the so what attitude, I was expecting nothing hot headed feminist anger but the artists have been far better than that with it, really pleased I came” 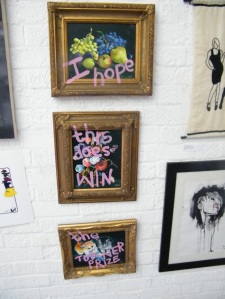 “Thank you so much for having me in the exhibition. Absolutely loved being part of such a really well curated and important show.”

“I would just like to thank you lovely folks at Vyner Street for having me take part in the fantastic Yeastie Girls exhibition. A great night on Thursday and a fabulous exhibition it is. Good luck with it.”

“Had a fantastic night for the opening on thursday, thank you for the opportunity to participate and see such amazing work and meet some crazy fantastic people!!”

“Thank you for last night and inviting me to exhibit with you – had a ball!” 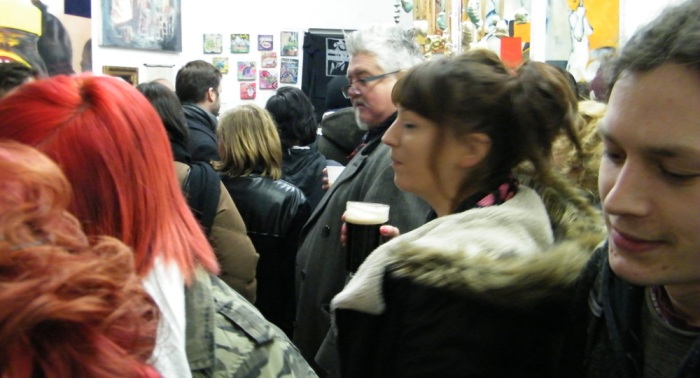 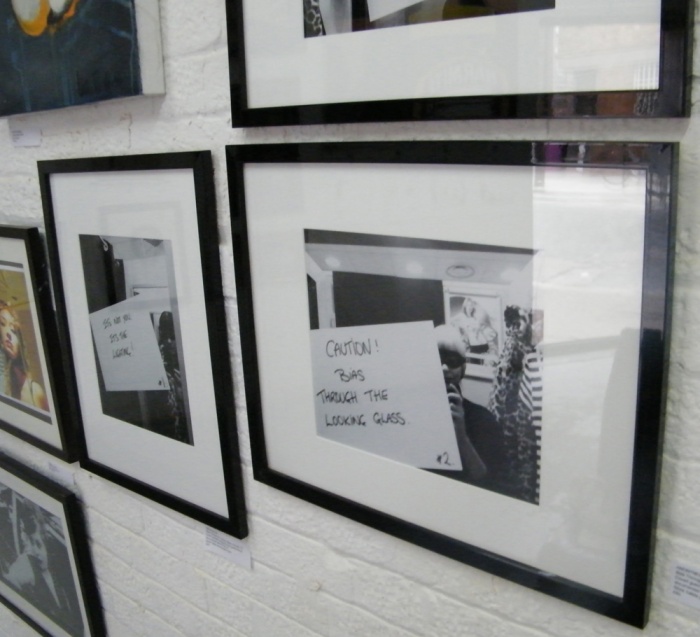