The last throws of June, the final throws of Used Boots and Panties as well as a goodbye to our current guest artists Omar Obaid and Kidd Feather – all change at Cultivate again (it always is all change at Cultivate), Omar and Mr Feather vacate their walls, take away their swans and their eggs, Julia Maddison’s month long Used Boots and Panties experience comes crashing down in a glorious rain of dusty cloth, battered  lingerie, broken heels and beautiful confession, all pulled down from the comfort zone of the  washing line or the line drawn in the sand or some other line that may or may not have been crossed sometime ago.  The line is drawn under a very busy June.

July is upon us, another First Thursday is upon us, new art, new artists, new guests. new boots and more freshly recycled not so fresh white paint on the walls of Cultivate.  This month we say goodbye (and big thanks) to Jessica Ballantyne and at the same time welcome a new full time Cultivate artist in the shape of painter Mathew Tudor. . 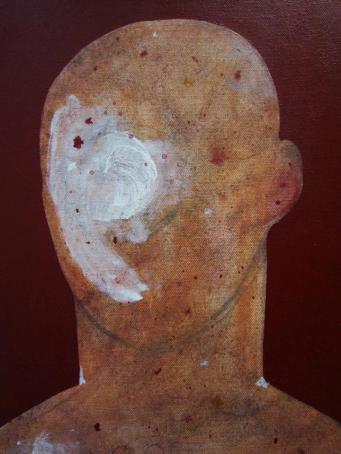 We are now six again, (we were seven for a couple of days back there in the middle of the month). Six people sharing an art space, well we are seven actually seeing as Quiet British Accent are two (we were eight for a couple of days back there in the middle of the month) –  we six are now (if we count QBA as one), we are Quiet British Accent, Emma Harvey, M.O.B, Julia Maddison, Mathew Tudor and Sean Worrall.  We shall all evolve our wall spaces in time for yet another First Thursday  – we make that thirty-five First Thursdays in an unbroken row now, this surely can’t go on much longer? We were only ever going to be in Vyner Street for six months, will we ever escape the depraved trench? Well that planning application is still hanging over us like some kind of wrecking ball laced with merciful relief or release or merciful fate or fete, or a fete worst than death and there really is no hope of a better Woolworth’s now? Looks like the planners are going to be busy arguing with each other for a while yet while the urbanist vulture watches on and waits to pick off yet another art space and hack another slice off what was one a functioning creative community of people people and space   Trust-fund urbanists with their self imposed tittles of importance are on our door steps, busy closing doors, closing galleries and not actually practicing what they superficially preach, whoops enough of that, you got to laugh at the audacity of the self-proclaiming man though, I see he’s sucked the First Thursday officialdom with his talk this month, enough of that and on with actually doing it. “A better Woolworths” as it were, an open door rather than a press release. . .  . .

July, First Thursday, Mathew and the rest of us will be joined by four new guest artists, four new guests joining us for two weeks that start on Thursday.  This July First Thursday, we shall be joined once more by Cultivate regular and serial poster-manipulator Piky – alongside the returming Piky you will find three artists new to Cultivate walls in the diverse contrasting shape(s) of Jayne Anita Smith, Michael Stevenson and Nadine Talalla. The four new guests will join the six current in-house Cultivate Evolved artists from July 3rd until July 16th, July 3rd being First Thursday and another late evening sown the street.

For those of you new to what we’ve been doing since the end of last year and the Evolved state of things, the full-time cultivate artists exhibit non-stop at the gallery – our six individual wall spaces ever evolving, the other four spaces are currently taken up by a revolving parade of guests, now and again we use the guest spaces for other things – things such as Julia Maddison’s Used Boots and Panties installation that has been occupying part of our space throughout June, or the forthcoming Little Summer Benefits thing that will occupy part of our space for the second two we of July.

From July 17th until July 29th another Little Summer Benefits event will occupy a significant part of Cultivate, well the four guest spaces to exact, in other words one long wall.  .

The by now annual LITTLE SUMMER BENEFITS wall for 2014 will last for two sunny weeks during the second half of July, it will open on Thursday July 17th with an evening opening private view open to everyone not very private kind of thing  An affordable art event and a fund-raiser for our artist-run gallery space, the Little Summer Benefits wall will occupy one full wall at Cultivate Evolved (the rest of the gallery will be occupied by the six current in-house Cultivate Evolved artists). We shall have a late evening opening on the 17th July and the gallery will be open for the usual regular gallery opening hours throughout the two weeks (besides Saturday 19th July when we shall be closed and taking part in A Fete Worse Than Death over in Rivington Street, Hoxton, East London).

More about A Fete Worse Than Death next time, for now we’re focused on another East London First Thursday down Vyner Street, that and the second Art Car Boot Fair Event on Saturday 5th July, this time as part of the Liverpool Biennial. The Cultivate team will be in Liverpool next Saturday with a boot full of art…

Part two of this year’s ART CAR BOOT FAIR adventure see us following up the London event at Brick Lane with a trip to Liverpool for the opening day of the LIVERPOOL BIENNIAL. We Cultivate artists will have a “boot” full of art at the event that takes place on Saturday 5th July  (12-4pm, 45-61 Duke Street, Liverpool, L1.  Entrance on Wolstenholme Square)

Here’s what the Art Car Boot Fair team have to say –  “We’ll be pushing our boots out for the first time in Merseyside bringing highlights from our London event plus a whole new and exciting Liverpool crew to join in with all the excitement of the opening weekend of the Liverpool Biennial. Featuring Gavin Turk who will be driving his Canvas Car to Liverpool with a boot-full of artworks created just for the day!

Busy times, more next week when we shall explore A Fete Worse Than Death, the third and final leg of the Art Car Boot Fair adventure and have a closer look at some of the art you can expect to find on the Little Summer Benefits wall