One week on, and yes, I will say so myself, I thought Interact was excellent, Sir Ian McKellen didn’t comment on his pasty or his pastry but he probably did as well, Marnie Scarlet got all brilliantly yellow, the neighbours got worried about the number of people showing up, there was interaction, cross-pollination, artists meeting artists, people engaging and Art Map London – a publication run by people who boldly claim it to be, on their Twitter tag-line, “everything about the London art scene in one place!” – ignored the event before hand, ignored it while it was actually going on and ignored it afterwards. as they tend to do with most artist-led London Art Events. Up to them what they cover via their publication of course but hey, don’t make the “everything” claim if, yet again, you’re going to go out of your way to blatantly deny the existence of big London artist-led events like the one that took place last week. “Everything”? Really? Art Map London are part of the problem rather than part of the solution in terms of the way artists are treated in London, and we really do need a solution right now, or at least more of a collective united effort.

Art Map London are the people who launched their website with a big fanfare about being about supporting artists and being artists themselves a couple of years ago, they made a big noise about the problems of venue hire prices and yes, pretty much everyone agreed with them. They made a big big noise about setting up a directory of free spaces to show art, they got us all to go in hope to their launch night to see what they were about, at last someone grabbing hold of things and doing something.   We quickly discovered it was pretty much a load of hot air, noise and empty promises and that the only way we could view this trumpeted list of free spaces was to pay a £25 a month fee that gave us access to their website, apparently when you did there was nothing much to be found there. I’ve yet to actually meet an artist who actually found a free space via their site,   That was a couple of years ago now and most of us saw through it all and dismissed it all as yet another group of people wanting to make money out of artists. But they are still out there and they’re still making their claim to be on the side of us artists and they still claim cover “everything about the London art scene in one place!”. I think they might need to check a dictionary in therms of that “everything” claim!  And yes, you actually cover everything is impossible, but hey, to blatantly ignore big shows and the press releases that are sent out ahead of them, Interact wasn’t some tiny little show in a back room, it was a significant art event and deserved some honest support from those who claim to be supporting art and artists while they make their money out of us….

I do wish we could have some decent on=the-case honest art media in this city of ours, a publication that actually walked it rather than just talking it. And don’t get me started about that bloke in his hat again. fast what? At least yer man from Artlyst had the decency to acknowledge the art looked rather impressive and apologised for not making it to the show. Personally, I though the artists taking part deserved a little more from the self-congratulating London art media (and indeed from those who curate shows in East London galleries that more often than not feature overseas artists in their new art project spaces and such, How many minutes would it have taken quite a few of you gallery people to walk over and put your noses in during the four days that the show was on?

Enough of all that, we clearly have to put on our own shows, create our own media and create an artist-led alternatives, clearly to be expecting the art media and those who run galleries to take an interest in what the 28 artists featured in the Interact show are doing is stupid. We really do need a better Woolworths now, we need a new media, a new attitude, a new support network, a new unity.  Art Map? Kind of like claiming to run a roadmap website and leaving half the motorways off….

So one week on from Interact, and we’re getting on with the next things, regular Cultivate contributors  are indulging in a little social commentary, documentation along with their signature sky blue and red wordplay  at the top end of Hackney, here’s some Organ coverage….

Quiet British Accent’s summer seaside adventure opened last night on a beach at the top end of Hackney on the edges of East London. Okay, so there wasn’t any sea and the “beach” was more the backyard that doubles as the open air Elements Gallery out back of the… read on 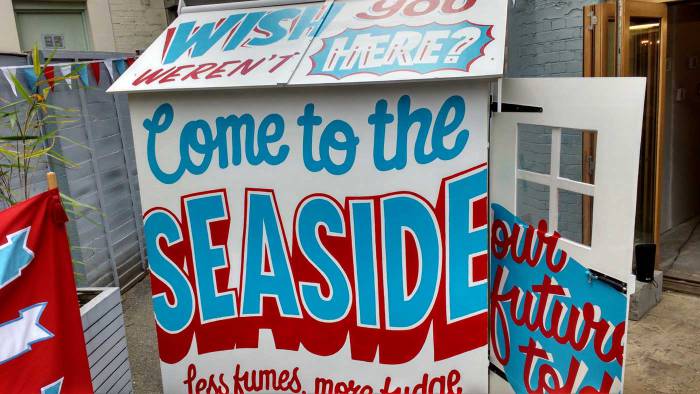 This coming weekend, 43 of the daily paintings with be hung, not dropped, never dropped, care is always taken to hang the pieces properly in the right places. this coming weekend 43 paintings will be hung on the streets, walls and green areas of Leytonstone (London E11). The piece of work in 43 parts will he next #43ArtDrop and part of the 2017 Leytonstone Arts Trail.  There an interview with me up on the Arts Trail website ahead of the event, the Arts Trail itself takes place between July 1st and July 9th, the #43ArtDrop itself will happen on Saturday 1st and Sunday 2nd June. 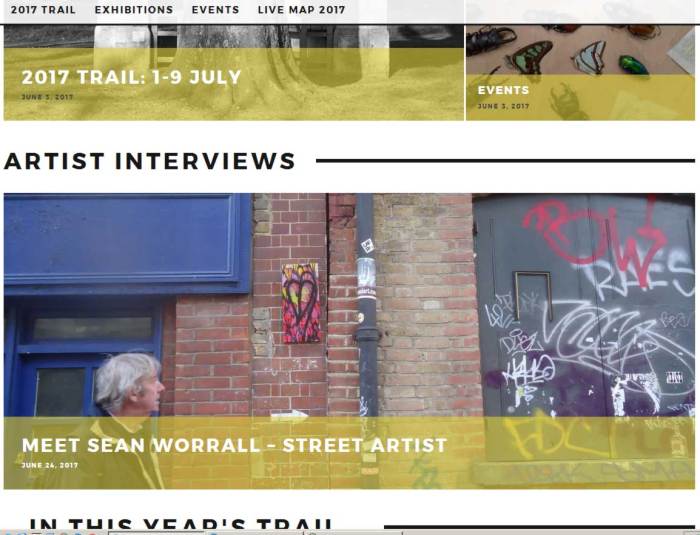 And so, one week on from Interact, I thought is was a significant show alive with some  excellent art and an exciting atmosphere, it felt like a real event, as good as anything that’s happened in terms of London art shows this year and yes I know we put it on and I’ve got a very big mouth. It was a damn good show, shame you won’t read about it via the London art media, once again you need to get out there and find the exciting art events for yourselves (or read Organ of course, we don’t cover everything, but then we don’t claim to be covering everything, we;re covering a hell of a lot and quite often we’re the only ones doing so, maybe we’ll start our own London Art Map? Enough, work to do, we’ll write some more about the artists from Interact in the next few days, we’ll get on with organising the next Cultivate events, preparing for the Arts Trail and then the Art Car Boot Fair, we love being part of the Art Car Boot Fair, I hope you’ve noted the change of venue for this year’s London event.

A big thanks to everyone who did show up or took part in the Interact show, if you want to know about our next events, then please follow our social media, or sign up to the mailing list or check Organ or check here, don’t expect to read about any on it via Art Map London or FAD or anywhere like that, they don’t seem to want to be bothered  about covering or sharing details in terms of what’s really going on in this city,   (SW) 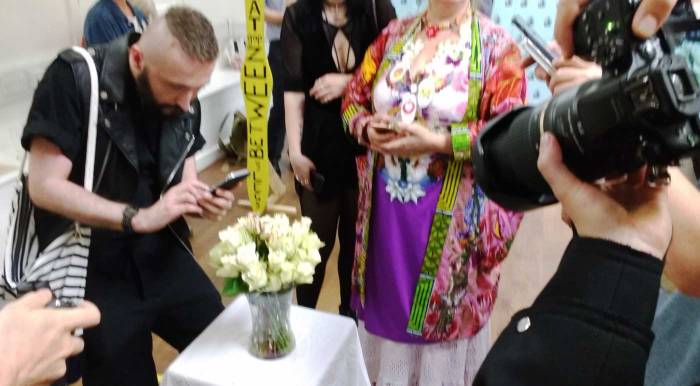