At the end of last year we evolved the space (and indeed the name) and Cultivate became Cultivate Evolved.  We changed it, well tweaked it,  just over two years in to what was only ever going to be six months in Vyner Street – For two years we ran a non-stop parade of group shows, solo shows, events and more, it was mostly brilliant but it had to evolve. The gallery has been known as Cultivate Evolved for around eight months now, the idea of a gallery split in to ten, ten wall spaces permanently used by eight in-house artists and two guests.   Of course it hasn’t quite worked like that…. hang on, lost the thread, started this latest blog outburst last week, been busy, always too busy. Hackney WickED, Little Summer Benefits, searching out the next guest artists, looking after the space, started this blog update last week, painted another hundred pieces and let most of them loose since then. Art does not take a holiday….. Hang on, where are we? No time to blog and such, to blog or to paint? Still as full on and non-stop as ever at Cultivate, the evolution was really supposed to be about us all doing it together, not really worked like that though… 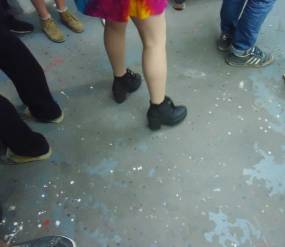 So we made it through our 36th First Thursday in a row, a rather pleasing night, busy busy, one of the busier First Thursdays of recent times. Still always busy on a First Thursday of course but it is all relative and it was a shame to see one or two of the bigger galleries choosing to close and head off on holiday instead of being part of something that I always saw as being about a collective whole rather than individual galleries and art spaces. See the thing that’s hopefully still special about Vyner Street, something that is worth fight for, is the thing as a whole, the whole street and the collection of galleries, art spaces, artists studios and more that are all together in one unique and spacial street, yeah yeah yeah, you might sneer at Vyner street and yes there may be a lot to sneer at, but you really are going to miss it when it has finally all gone.  I always thought it was about a collection and community of people that make the street unique, always disappointing when some lucky enough to be involved in this special street don’t see it light that (especially with the onslaught of urbanist property developers who claim to be about community looking to kill it all off and pocket the profit as they pollute the once unique street with their developments, impose their…. nah, enough of that, you know what I mean) 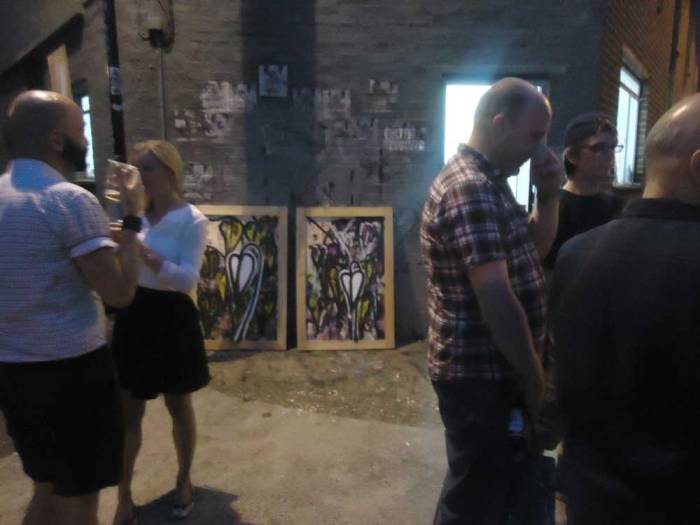 Art Does not take a holiday, get your spaces open and treasure your street while you still have it to treasure!  You need to put in the time and effort, not just live off the back of it. August First Thursday was a good one, always a little stressful for me, it was good though, I love the interaction, the art talk, the relaxed atmosphere, the open door and everything that goes with it, the breaking down of barriers,  love it all – well besides the person who stole my beer and one of my paintings, don’t love that – I’d been attempting to not drink all day, a day that started at 11am and ended up being a twelve hour non-stop no-break shift for me (yes I know, I though t we’d evolved it in to some kind of collective of artists working together, not sure where everyone else was again?). So yes, to the person who stole one of my paintings, hope you enjoy it, if you wanted it that much, I really hope you get something out of it (and if you see fit go donate something to Saint Josephs Hospice just up the road from Vyner Street), to the person who stole my one bottle of specially saved beer, a bottle of beer that I had been looking forward to all evening, what a low down snake of thing to do! What a despicable thing to do, way way way out of order! Probably one of you beard growing hipsters wasn’t it, have a good look at yourself in the mirror, and not to admire your frankly silly looking beard, you dirty low-down beer thief! 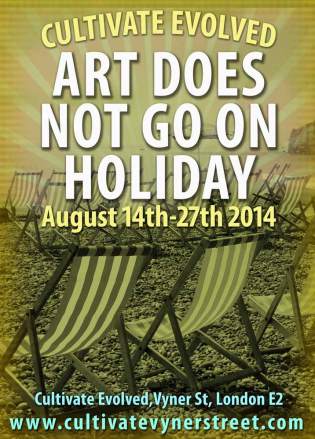 First Thursday was a (beer-free) stressful twelve hour buzz, thirty six in a row without a break, the next one (if we make it to September First Thursday) will be our third birthday event, three whole years of First Thursdays, fighting of developers, beer-thieves, urbanists, beard growers, artist egos, three years of the unfriendly WIlkinson stare (they still can’t bring themselves to smile or say hello after almost three years, they just stare). Will we make it to September First Thursday? Never mind that, right now we have holiday breaks on our minds, where shall we go? Feet up by the pool?

ART DOES NOT GO ON HOLIDAY. a two week show brought to you in the spirit of lastminute dot com… .     .    COME JOIN IN! Real artists don’t go on holiday!

CULTIVATE EVOLVED – ART DOES NOT GO ON HOLIDAY

The Next Two Weeks – 14th August to 27th August  – Our guest wall for the next two weeks will feature art that excites us enough to make us want to hang it during this holiday month. Art Does Not Go On Holiday, we wil lnot be stopping and Cultivate will be open (and especially open for all those people who come to London and Vyner Street during their holidays)

HOLIDAY POSTCARD CALL – We invite artists (and anyone else) to send us postcards from their holidays – send postcards, sticks of rock and whatever you want to CULTIVATE, 49 Mowlem Street, London E2 3HE. We shall not be on holiday, we shall be here working, painting, curating, doing things, getting on with art…

ARTIST CALL – We invite artists not on holiday to come join us and submit work for the guest wall – details via info@cultivatevyner street.com – this will be an open call, open in terms of everything, no subject, no rules other than the rule that it has to excite us enough to make us want it on our walls for the next two weeks. E.mail us for more information – info@cultivatevynerstreet.com