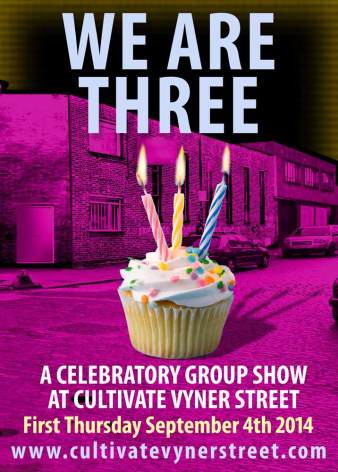 WE ARE THREE…. And indeed we are! Three years of defiantly doing this thing we do.

Cultivate first burst in to life on a dramatic First Thursday back in September 2011. We took on the space on the Wednesday, put an artist call out that night, got the keys at 3pm on the Thursday afternoon, cleared the space out (old beds and all kinds of clutter) and somehow opened five minutes late at 6.05pm on First Thursday evening back in September 2011- it was a brilliant night, an exciting night, artists coming together and making something happen. Three years later, against all the odds, we’re still here and preparing for out 37th in a run of unbroken First Thursday evenings. That’s right, we’ve been there, smack bang in the middle of Vyner Street with our door wide open, our lights full on and our signs outside for every single First Thursday since that manic September three years ago. Of course it isn’t all about First Thursday evening, far from it, but it does bookend things neatly in terms of us being there and being three and magic numbers and as regular visitors know, we are all about book-ended neatness and the order of things like printed artists statements here on our always formal and shipshape perfectly curated corner.

On September First Thursday in 2014 you will (hopefully) find a messy gallery space as alive with exciting art and diy attitude as it always is – a place alive with a combination of colours, shapes, textures and contradictions from our current in-house artists and a selection of invited guest artists.

More artist details in a moment, watch this space.

Three years then, we really didn’t intend to stick around for three years, we took the space on for six months and we really didn’t expect to last that half a year. We (Emma Harvey and myself Sean Worrall) took on the space for a number of reasons, one of the main ones being that we didn’t like the way artists were being treated in London – we didn’t like the outrageous hire fees being charged for spaces, we didn’t (and still don’t) like the fees and retainers, the gallery commissions and the ways galleries seem to be more about exploiting and living off the fees they can charge artists rather than working with them. We opened Cultivate because we didn’t like the closed doors and elitist attitudes, the you’re not welcome here feeling that most London galleries seem to delight in giving off. We wanted a space that was run by artists for artists and for those who want to come explore art without the intimidation of a closed door and having to knock, a friendly space, a welcoming inviting space, an art chute, an alternative.

We’ve experienced a lot in our three years down Vyner Street, we’ve seen a lot of comings and goings, we’ve learned a lot, we’ve shared a lot, we’ve had a lot of exciting art on our walls, I’d like to think we’ve helped a lot of artists, made a lot of friends, interacted with people who tell us they like to come in and explore the art and chat to us.

We know we’ve got some of it wrong, I’d like to think we’ve got a lot of it right. We have no idea how many shows we’ve put on, how many artists have featured on our walls and plinths. We’ve got to know the passing bus drivers, the people who pick up their kids from school along the road in the afternoons, the art collectors who make their regular trips to the street, the traffic wardens, the photographers, the now aging onetime foot-model who knew the Twins and remembers when blood would run down the street (an abattoir, rather than anything involving Jack The Hat or anything like that so she says). We’ve got to know passing dogs (and their owners), we’re on first name terms with returning visitors from overseas. We’ve experienced the egos of street artists, the insecurity of performers, the anger of abstract painters, the demands of print makers, we’ve had run ins with the council, we’ve been (very) frustrated with the apathy of the so-called art media and we still haven’t managed to get a smile or a “good afternoon” from the white cubists of the great big Wilkinson Gallery just down the road (maybe they’ll drop by with a big far birthday cake? Probably not, we have overheard the “that is not the way to run a gallery” conversation on more than one occasion). We’ve seen galleries around us come and go, we’ve seen hope flow and then fade, we’ve hung on for almost three years now (often by the tips of our fractured paint encrusted fingernails and an understanding landlord), we don’t expect to be here much longer, the threat of the urbanists and property developers has been hanging over us for some time, and they really are closing in now. We probably should have packed it in a long time ago, we certainly didn’t intend Cultivate’s stay in Vyner Street to be anything like three years. Who knows what happens next? We didn’t come in with any great plan and we have no great plan now. If we’re honest then we’d say we’re a little disappointed that the idea of Cultivate hasn’t been embraced by a few more of you artists, always been a battle to get people involved – yes I know we’re picky about the work we show and some artists understandably don’t take kindly to a no, but we are a little surprised that more of the artists we have featured haven’t wanted to get more involved – as we keep on saying, it is about getting involved..

Three years then, we got some of it wrong, we’d like to think we got some of it almost right. We’ve had a (mostly) great time, we’ve (mostly) enjoyed doing it (mostly) on our terms, it has been hard (mostly rewarding) work, there’s been no days off, we can’t afford days off, days off are not a serious option, it really is that hand-to-mouth, this is not some rich kid trust fund operation and frankly we’re broke (donations are more than welcome!). Damn, this has turned in to another stream of organic ranting and raving when all we wanted to do was invite you to come and celebrate three years of Cultivate.

So, we are three, please do come celebrate with us, three years of non-stop cultivation, art and maximalist doing it, we think that’s worth celebrating, don’t you?

Treasure your artist-run spaces while you still can, you’ll miss them when they’re all gone. Thanks everyone, we’ve (mostly) loved doing it…. 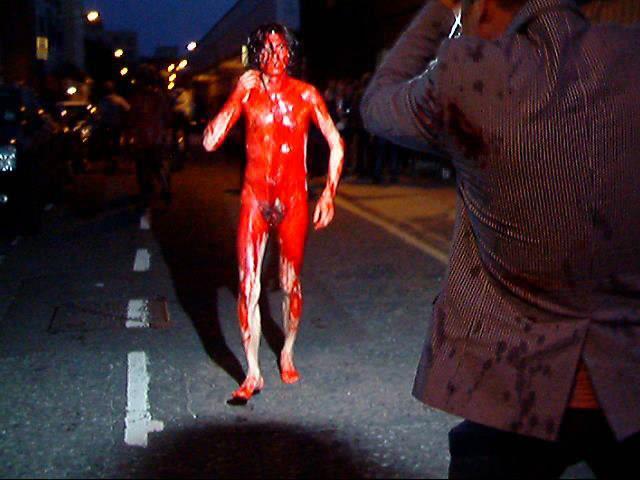