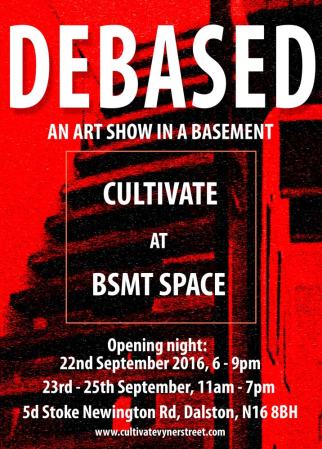 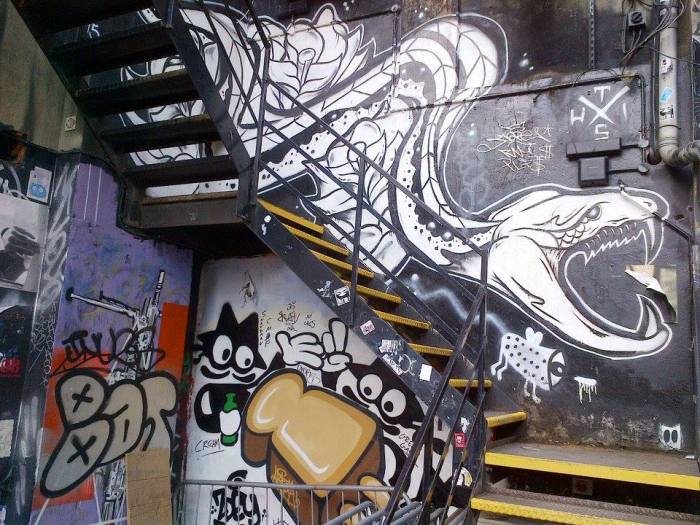 This One  getting all snake shaped….

This One is a Yorkshire man slowly painting all of London, well rapidly actually, This One is a prolific street artist who’s tattoo-flavoured illustrative style kind of stands out on the walls he’s adding to. Unlike a lot of the current crop of street artists This One’s standout black and white style translates rather well to canvas on a gallery wall, read and explore more over on the Organ pages today….

Last year at the Cultivate take over of that condemned East London warehouse for the Play show, This One found and painted a couple of doors, here’s one of them sharing space with two of Deborah Griffin‘s rather boldly-gothic canvases. Deborah will be joining us on Thursday as well….

Apple Tart is a performance artist, expect Apple Tart to be at the opening of Debased on Thursday evening, we don’t know what to expect…

The exciting thing about gathering artists who don’t usually share walls and gallery space together is making it all fit together as one….

Christophe Cachelin, aka Kidd Feather first came to our attention via his music a couple of years ago, London-based, born in Berne, Switzerland.  The Kidd has been experimenting with a lot of different media and techniques, his art kind of looks like his music sounds. His . felt tip penned sounds, his uplifting animal universes, his giant egg sculptures, simplistic nudes, ceramic masks and most recently his cut outs. The thing that unites all the sound and vision is Christophe’s use of colour. He’s had several group and solo exhibitions in London, amde several appearances in Cultivate show and most recently exhibited at the Yami Ichi Market at Tate Modern in May 2016. He say’s his biggest influences are Henri Matisse and Niki de Saint Phalle…