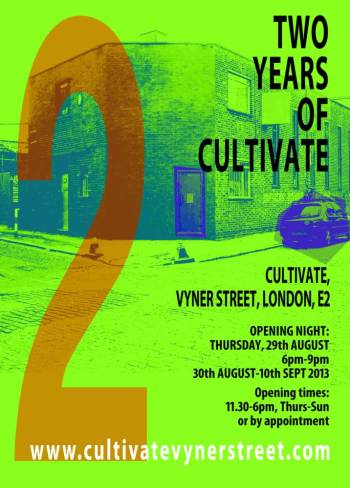 It was actually two years ago Yesterday that we actually took over this corner space smack bang in the middle of East London’s notorious Vyner Street. We actually signed the rental agreement on Wednesday August 31st 2011, we put the word out that night that we were opening the next day, it was a spontaneous thing, no big business plans or working up to it for weeks, it really did all come together over a couple of days, we signed the agreement on the Wednesday afternoon, paid the deposit and the first month’s rent and found ourselves with 22 hours to put the word out, get a show together and get a gallery open . so the word went out that night that we would be opening the next day and that the invited artists should just turn up with a piece of art. We finally got the keys at 3pm on First Thursday, September 1st, 2011, the room was full of old beds and bits of junk with three hours to go, but we had the keys, the corner was ours for six months (just as long as we could pay the rent each month), By 6pm on September 1st, we had a show up. the place was over run by naked red men, and the rest, as they say, is history… Two carries on this First Thursday, our 25th First Thursday in a row, TWO celebrates two years of Cultivate in Vyner Street…
.

TWO is a Two week group show to mark two years of artist-run cultivation on our corner.TWO will mark 70 shows/events. 104 weeks of always being there – no closing down for summer holidays, months off in winter, no sitting behind closed doors.TWO will open on Thursday evening August 29th and will take in a second late night on First Thursday September 5th (our 25th in an unbroken run of very very busy First Thursday evenings on our corner right in the middle of Vyner Street and all that Vyner Street stands for)TWO will feature a mix of the art of artists who have worked with us and excited us most over the last two years, as well as, in the now established tradition of Cultivate, an artist or two who probably hasn’t shown work in Vyner Street or Cultivate before. Expect artist announcements over the next few days…

CULTIVATE is currently a gallery space based in one of East London’s busiest art streets, Vyner Street.

Originally intended as a six month experiment, the open-door gallery art-space on the corner in the middle of Vyner Street is loved by some, loathed by others, it has excited, annoyed and we’ve enjoyed sharing the art of hundreds of stimulating artists with thousands of enthusiastic visitors

TWO will mark two years of exploring, experiencing, sharing and doing things on our terms. Expect a number of events during the two weeks. 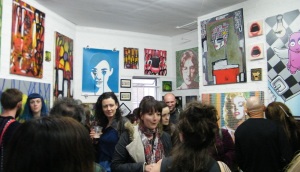 Cultivate was originally set up an a six month artist-run experiment, two artists rather fed up with the London gallery system and the way we artists are treated (some might say exploited), frustrated by the system and how it works, with how most artists seem to accept it – a pro-active attempt to understand why rather than just moaning about how it appeared to work. We’ve learnt lots, we’ve experienced lots, we’ve been excited, frustrated, annoyed, enpowered. We’ve been delighted by the reactions of people coming in, reaction to our open door policy, we’ve been excited by some of the artists, the conversations, the debates. We’ve made mistakes, we think we’ve got a lot of things right, we’ve had some exciting shows, introduced a lot of artists to wider audiences, we’ve been disappointed by almost everything to do with the London art media (do we really only get coverage if we pay for advertising?).  We’ve experienced open hostility from some of those galleries we’ve challenged, we’ve had great support from those who have appeared to get it, the Art Car Boot Fair people and such – the Art Car Boot people have been great actually. We still haven’t got a smile or a hint of a hello from the Wilkinson people, we call it the Wilkinson stare, we’ve seen Vyner Street galleries come and go, we’re particularly enjoying the current evolution of LimeWharf and the re-birth of the stuffy old Fred space at the moment (really excited about their opening this Wednesday evening).  We’ve met artists and art collectors from all over the world, we’ve seen our art go out all over the world, we;ve re-painted our walls more times than the Forth Bridge, we’ve been there for 25 First Thursdays in a row, the First Thursday people used photos of our packed gallery on their official website for over a year, although it does seem difficult for them  to ever actually acknowledge  the very committed Cultivate contribution to the monthly event.  We put on seventy shows and events (so far), we’ve been open every single week, we’ve been physically attacked, we’ve enjoyed verbal jousts – we’ve been looked down on by self-confessed art snobs, we’ve sneered at art snobs, we haven’t had a day off, we have no idea what a holiday is, our landlord has been understanding, we love the Victory people, the taxi garage people and the passing bus drivers, we love the ex-foot model and her tales of the 50’s, the man who came in last week and debated the making of art before buying a piece, we’ve been visited by Ants, Pet Shop Boys, the Police, we’ve been told we’re rocking the boat too much, that we’re not  running a gallery properly, that our door should be closed and that there’s a reason why galleries need to be elite and exclusive, we’ve been thanked for not being intimidating, elitist or for thinking it should be exclusive, thanked for talking to people, for “being human”.  We’ve been on our corner in Vyner Street for two non-stop uncompromising years now, we think on the whole, it has been a positive two years, the time to move on is coming, we were only going to be here for six months, there will not be a Three show on our corner… The red men were nothing to do with us. Big big thanks everyone, come celebrate with us this First Thursday (bring your own drink, we’re skint)
Sean, Emma….

CULTIVATE – We Are All Skateboarders opening night (Aug 1st 2013)