TWO at Cultivate, a word or two about the artists we invited to be involved…  (if we say naked and undressed in the tittle, we get far more hits….)

BECKY BOSTON’s stylish work first came to our attention at Cultivate via the feminist group exhibition, Show Your Face, put on my London-based all woman art group Vivian Vile, at our gallery, back at the start of 2012.  We’ve had the pleasure of inviting Rebecca back to take part in several of our shows since then – her distinctive instinctive style and her very personal incite is currently attracting lots of attention in galleries both around London and beyond, we love her bold poppy style, her capturing of spirit, her people…

CHARLIE McFARLEY – Hackney’s very own Charlie Mcfarley (proper born and bred Hackney that is) has been involved in quite few of our shows down grey old Vyner Street. Do recall Charlie once telling us his bold bright style was something to do with him escaping the grey walls of his East London upbringing, Escaping in to a world of ice cream and bright colour and… Charlie has produced a new canvas piece for the Two show, bight be his brightest creation yet, no one does it quite like Mr McFarley – proper.

LOS DAVE is a Portsmouth based artist, very much involved in the Free Art scene, Dave made his Cultivate debut as part of the MyDog Sighs curated In Rust We Trust show, a show that had people lining up outside Cultivate hours before we opened it back in October 2012

DEBORAH GRIFFIN – A London-based artist with a taste for the gothic-flavoured devilish side of alternative life, Deborah has been involved in a number of our group shows with her golden demons, hearts and such. Her rather deliciously dark work featured last year’s Fools Gold show and the recent street-art-orientated Can show where her work was snapped by eager collectors on the opening night, Deborah has presented a new piece for the Two show…

EMMA HARVEY is a London-based painter who works primarily in oils. Her very personal work focuses on themes of sexuality and the place of women in contemporary society. Emma’s paintings are very personal explorations, journeys and observations that have to almost be coaxed out of her studio and on to gallery walls. This results in a questioning of self (and herself) as woman in contemporary society; seen, unseen and being seen. This piece is a taste of Emma’s forth-coming Cultivate solo show Fleashed (opening on September 19th)

JULIA MADDISON – Another London based artist, Julia has been adding her words to our walls – via canvas or directly on to our bricks for most of 2013, her work speaks for themselves really, her words say everything, you really don’t need our words, one of my favourite artists of 2013

MADELEINE STRINDBERG – Born in Cologne, Germany, Madeleine has spent most of her artistic life working in London. A multi award winning artist, the one time National Gallery artist in residence has exhibited in major shows all over the world. Madeleine has exhibited regularly at Cultivate over the last two years, including the Red show, the Primaries show and, well far too many to mention really, her contemporary style delights, amuses, confuses, thrills, questions, answers, it has been a delight to spend two years in the company of her bold brush strokes and her beautiful mind….

MODES OF BEING would rather we not talk about him or his art, you mostly find it on the street, it isn’t about the artist, self promotion, selling or any of those things, Modes of Being probably isn’t his name. You might find a MOB sculpture out on the street, a print on a wall (in this case a wall that happens to be helping hold a gallery roof in place), MOB might be a mob? A mob of artists? Or artist enjoying being no one? Does it matter? Just enjoy it. 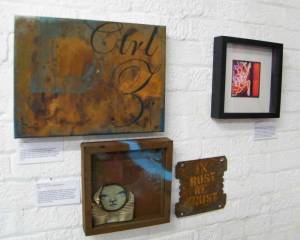 MY DOG SIGHS – Portsmouth’s My Dog Sighs, (we think he) made his London debut at Cultivate back in the Spring of 2012, by the end of the year he was packing out our art space and building a reputation all over the globe. His biggest triumph at Cultivate was the sell-out In Rust We Trust show late last year. My Dog, or the Can Man as some call him, is currently preparing for his debut New York solo show.

London’s PIKY says he has become intoxicated with street textures (which he terms ‘the Filth’): a gritty cocktail of revolution, collective memory, alien alphabets and advertising, served up in ad hoc layerings, combinations, and patterns. He explores this theme by transforming London street ephemera into subversive, satirical, and political art. PIKY’s work brings him into conflict with authority (and the other ‘Filth’): the dynamic act of ‘vandalising’ commercial advertising is the core theatre of his work. This new piece is the third we’ve had the pleasure of showing here at Cultivate.

SEAN WORRALL has spent the last two years Cultivating in a gallery on a corner in Vyner Street, he swears it will not be three years.

616 – Outsider street artist? English folk artist? Who knows where he fits? London’s demonically named 616 is far more comfortable painting on things he finds and leaves on the street that being confined by gallery walls, 616 pieces have been appearing on the walls of Cultivate since his debut in the Street Art flavoured show that was Can. His appearance painting live, hidden under hoodie, as part of the Cultivate collective at this year’s Brick Lane Art Car Boot Fair was a particular highlight. 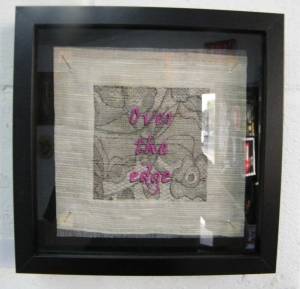 SHARON REEVES – Multi-media artist Sharon Reeves’ work “has been increasingly exploring feminine identity and sexuality. Inspiration comes from themes of suppression, inhibition, emotional resistance and freedom of expression of femininity, sexuality and self.”. Sharon has been one of our most regular exhibiting artists over the last two years, first appearing in the Something Blue show in November 2011. Highlights include her appearance in the triumphant Spring 2013 Yeastie Girls show

TIM SKINNER, a rather stylish painter, very much a painter, a man who uses paint, Tim is from Kent, he’s exhibited with us four or five times now, his almost old school modern style has him down as one of our favourite emerging young painters, he never fails to provoke a positive reaction when ever he shows with us, the current Two show features three of Tim’s smaller pieces,,,

SMEARY FAIRY is a new name in terms of showing at Cultivate, the Denmark-based artist likes to leave his cardboard pieces around the streets of different European Cities. He left a series of 14 London pieces between Cultivate’s front door and Bethnal Green tube station back on August 22nd, this piece is the 15th of that quickly snapped-up series. 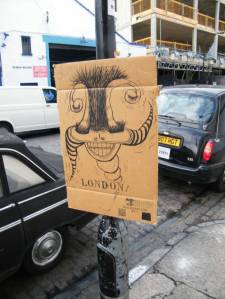 TRACEY MOBERLY is best known as one of the driving forces behind East London’s legendary Foundry art venue as well as for her recent project (and now book) Text Me Up. Tracey’s work first appeared on our walls as part of this year’s Riot Grrrl inspired Yeastie Girls show, she returned to Cultivate for the April 2013 Red Revised show with her series of Moberlygram photoprints from Berlin, of which the piece in this show is one.

TWO runs at Cultivate until September 10th, including a second late night opening on First Thursday September 5th. Two marks two years of us (defiantly) being here on our corner right in the middle of Vyner Street, London E2, showing art and sharing with people on our terms.